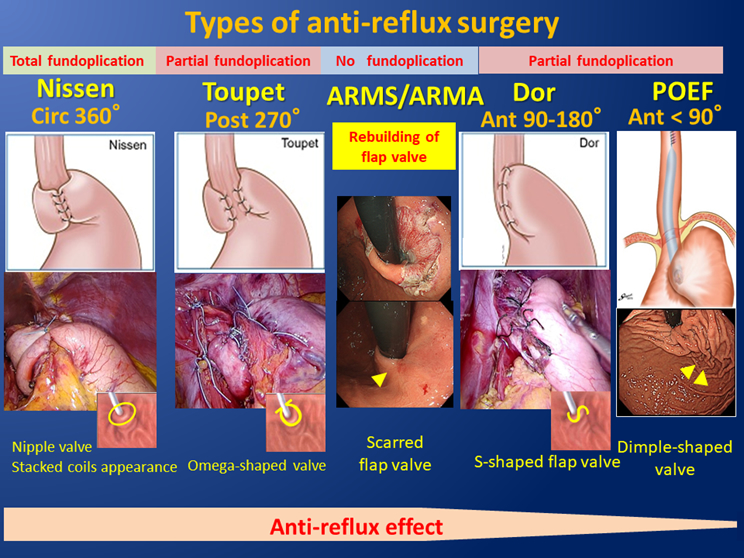 The image shows the list of procedures that can be performed in our center. The order in line represents the “intensity” of the treatment, not “efficacy”. Of these, POEF has the weakest anti-reflux effect.
We would like to emphasize that “the strongest treatment” is not always “the best treatment” for each patient. If we carry out the strongest fundoplication, like Nissen, for a patient whose peristalsis of the esophagus is weakened due to chronic inflammation, dysphagia may occur after the procedure. Therefore, we perform esophageal motility test (upper endoscopy, esophagogram, esophageal manometry) and esophageal 24hour pH testing in all cases and evaluate the cause of their symptoms.
Based on the result of these tests, we will be able to suggest the best treatment for you. 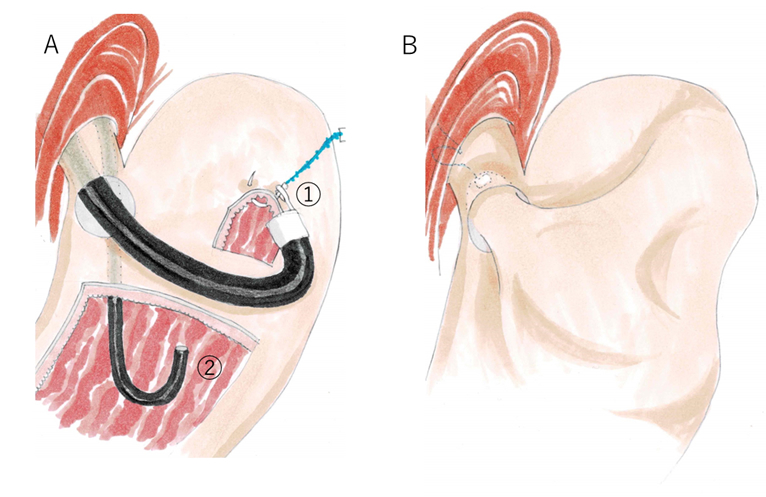 Fig. A：An illustration of POEF procedure. We use two endoscopes. One is in the peritoneal cavity which is used mainly for operation. The second endoscope is in gastric retroflex view to confirm the morphological change of the cardia and to assist the main scope.
Fig.B：An illustration of the result after POEF. Ideally, the shape of the cardia is similarly designed to that of Dor fundoplication.

POEF procedure by endoscopic suturing.
Submucosal endoscope is advanced through the peritoneum into the abdominal cavity.
Distal anchoring at the anterior gastric wall (A) in the abdominal cavity. By pulling back the scope and the device (B), suture is tightened up and partial wrap is created at the gastric cardia (C).

The morphological change at gastric cardia. Before (A) and after fundoplication (B). The cardia is covered again by the created floppy partial wrap.

Reflux esophagitis has improved 2 months after POEF (B) compared with pre-POEF (A).